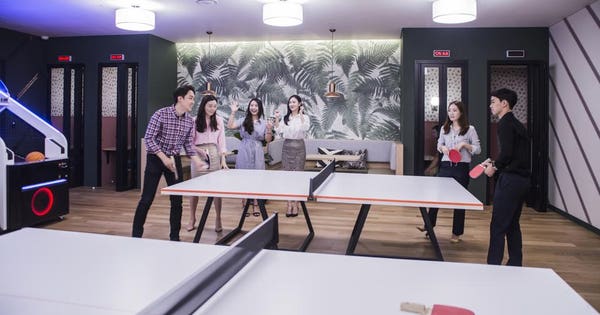 The greatest benefit of all is the ability for independent knowledge professionals with complementary skills to easily connect with one another and help grow each other’s businesses. Prior to the development of the first co-working spaces, entrepreneurs turned to business centers, executive suites and telecenters for access to office facilities in strategic locations.

However, the current iteration of co-working spaces really took up for the social/collaborative aspect, combined with the general aesthetic and material design of the spaces themselves, coupled with purpose and function.

Once co-working spaces took over, the demand for greater infusion of technological elements came in, such as speedy reliable Internet, computer workstations, support for mobile devices, audio-visual equipment, printing, phones and more.

These are some of the core services made readily available by WeWork, which has a valuation of $20B. Technologies found in innovation spaces can be collapsed into three general classifications:

It also leaves one to wonder whether there are any innovations left that has yet to be tapped into, or even mass-adopted in the co-working realm.

There actually may be something: blockchain technology.

Considering the rise of blockchain technology disrupting a wide range of industries, from communication, to gaming, to global commerce– it only makes sense for it to make its mark in co-working spaces as well.

That’s especially when considering the fact that blockchain is already being used to enhance other arenas in the workplace environment, as seen in the case of companies such as LifeTask. LifeTask uses blockchain technology to add a dimension to the modern recruitment system, by being the a decentralized competence platform for the talent driven digital job market.

Blockchain-based tools have the ability to enhance coworking-operator processes such as procurement, membership agreements and digital visibility through a more secure, efficient and less costly system. There’s a new cohort of coworking operators who are dedicating their spaces specifically to blockchain communities and ecosystems. Thirdly, some blockchain projects are trying to impact the shared workspace through the use of digital tokens, such as Primalbase.

Primalbase lets you share, sell or rent out working spaces using Ethereum and Waves-based digital tokens. They have offices located in cities with such as Amsterdam, Berlin, London, New York, and Singapore. They allow a system of dividing the available shared office space into private offices only for their community members (based on crypto-economic relations).

It’s important for entrepreneurs to note that the main benefits of blockchain centre around lease transactions and property management, as is shown by Deloitte’s latest Real Estate paper. Some of the ways that co-working operators can benefit from using blockchain technology include smart contracts; smart identities; improved discovery; and verified trust.

The co-working industry in general is making strong moves to advancing blockchain application through education, facilitation, collaboration and creation, as seen in the case of Full Node, which is a coworking space in Berlin built specifically as an anchor for blockchain companies.

Now is the time for company execs, freelancers, and anyone looking into shared office spaces to see how they can stay ahead of the curve by making use of blockchain technology.