Litecoin has been a crypto that has managed to overcome adversity. Created as a faster and cheaper alternative to bitcoin, this “old” cryptocurrency has had a very active journey during its existence, becoming one of the five most important cryptos in the ecosystem.

The main face behind this blockchain is Charlie Lee, a developer highly committed to his project, active in social networks and willing to face the users when it has been necessary. However, he has also managed to coordinate the best decisions to make Litecoin a currency by itself, surpassing its original image of “a cheaper bitcoin.”

In its eagerness to spread the use of Litecoin in everyday activities, the LitePay project sought to offer people the possibility of making various purchases and payments in Litecoin, allowing the platform to exchange them directly into FIAT. In this way, users would not have to continually be passing their funds to an Exchange or through P2P markets but would simply use a specially designed credit card for this purpose.

The project kept the community expectant until the last moments. However, skepticism and suspicions began to emerge after its CEO conducted an AMA on Reddit, receiving a wave of negative criticism without being able to offer concrete solutions or explanations.

After that, the road was complicated. LitePay’s CEO announced his resignation and the sale of the company, triggering a price collapse in Litecoin candles. However, Charlie took his share of the responsibility and just went ahead, learning from the mistakes:

If there were those who thought that this might be the end of the famous crypto, they probably already realized they were wrong. The team’s efforts to exploit the potential of this blockchain (decentralization, mass adoption, scalability, speed and low fees) led them to engage in multiple conversations with potential partners. And in the last few days, there have been some strategic alliances that can fill the gap left by the LitePay team’s unfulfilled expectations.

The tweet confirms a previous announcement made by TenX

The decision is notable because TenX’s service would make it possible to meet the goal of using a card to perform traditional operations. However, there are still several regulatory issues that it is important to resolve before having a product ready. The difference is the experience and proven robustness of a startup like TenX

Another good news was the immediate support for Litecoin’s use with the TenX wallet so that users can manage their Crypto from within the application, increasing their options and benefiting from the advantages offered by this prestigious company.

But the good news doesn’t stop there. Another excellent announcement for hodlers was that Korbit would list the crypto on its platform to allow it to be regularly traded.

Each time a cryptocurrency is added to an Exchange, its volume increase causes an uptick in prices. However, beyond a simple pump, the fact of Litecoin’s credibility and Korbit’s trajectory make the streak more sustained. As it can be seen from Charlie Lee’s tweet, this alliance was something he had been working on for some time now.

This run of good news has made it possible for Litecoin to grow significantly since the beginning of the month. This trend can be seen more clearly using Heikin Ashi candles: 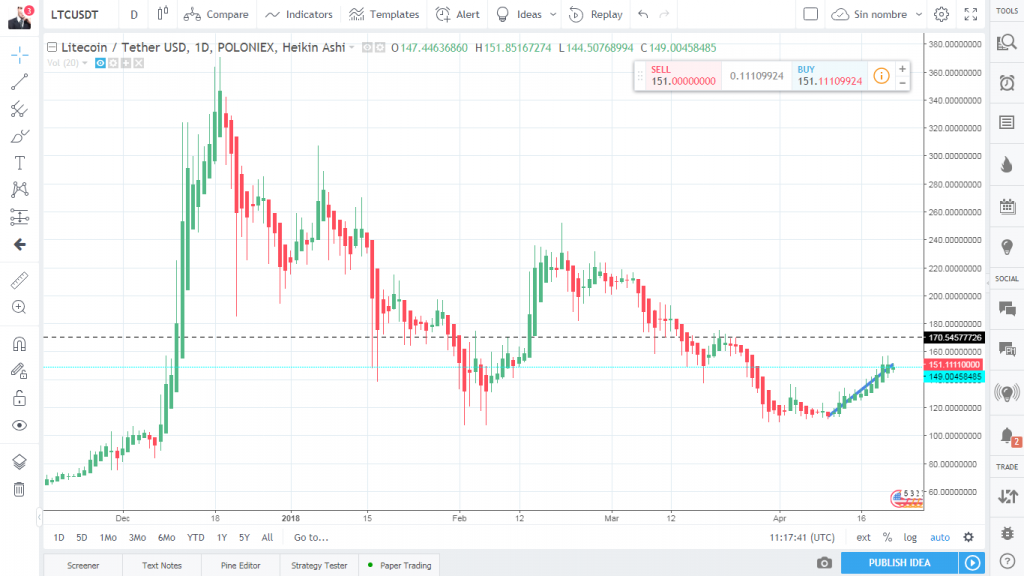 The dotted line represents an area that has served as support and resistance on several previous occasions (something that can be more easily verified by using Japanese sails). While a small decline is possible in the short term, a sustained bullish trend is something that many fundamental analysts believe is highly likely to happen.

Great news for those who believe in Litecoin and wish for massive adoption of cryptocurrencies. Perhaps soon we will witness the famous flappening expected by Litecoin enthusiasts.